WE LOVE THE WAY WINE EVOKES COMMUNITY, HOSPITALITY AND BEAUTY. LET US SHARE OUR WINES WITH YOU, WHEREVER YOUR GRAVEL ROAD TAKES YOU. 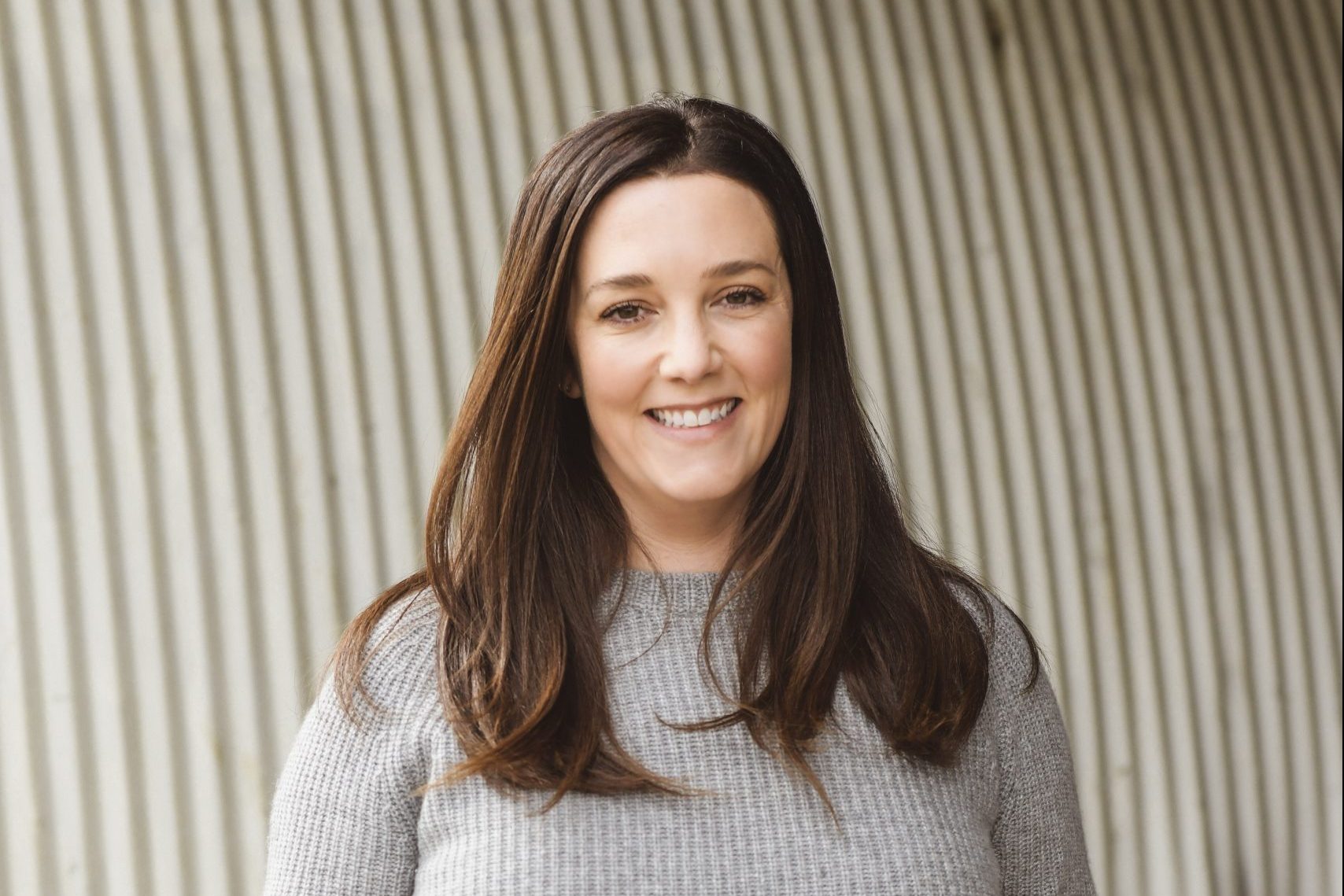 What brought Gloria to Yakima? Simply, love. Gloria met Charlie Gilbert when they were both studying at Le Cordon Bleu in Portland. After pursuing formative experiences in the culinary world–namely assisting on Food Network programs like Giada at Home and The Pioneer Woman–she firmly planted herself in our Yakima community. When Gloria isn’t running around the winery, she’s on her patio sipping Rosé and enjoying life with Charlie, and their daughters Daisy and Daria.
gloria@gilbertcellars.com 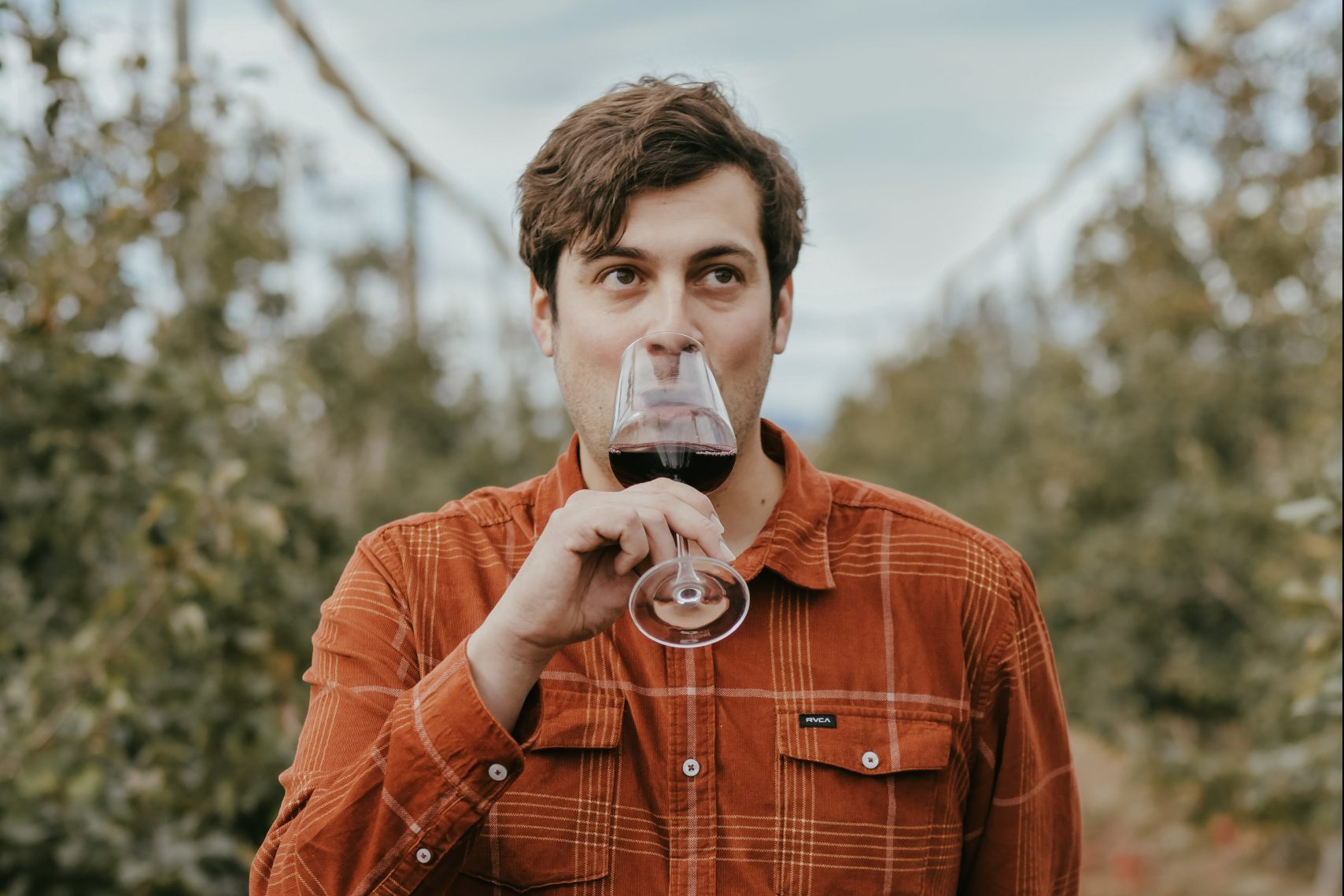 Charlie has worn many hats in the company: from making cheese-plates, doing punchdowns, counting inventory, and currently selling wine. Charlie joined our sales team with a focus on the Pacific Northwest and now heads up all national sales. Culinary degree and all, his passion for food and wine has fostered relationships with restaurant owners and sommeliers during his travels around the country. Charlie enjoys skateboarding as well as consuming delicious food and wine.
charlie@gilbertcellars.com 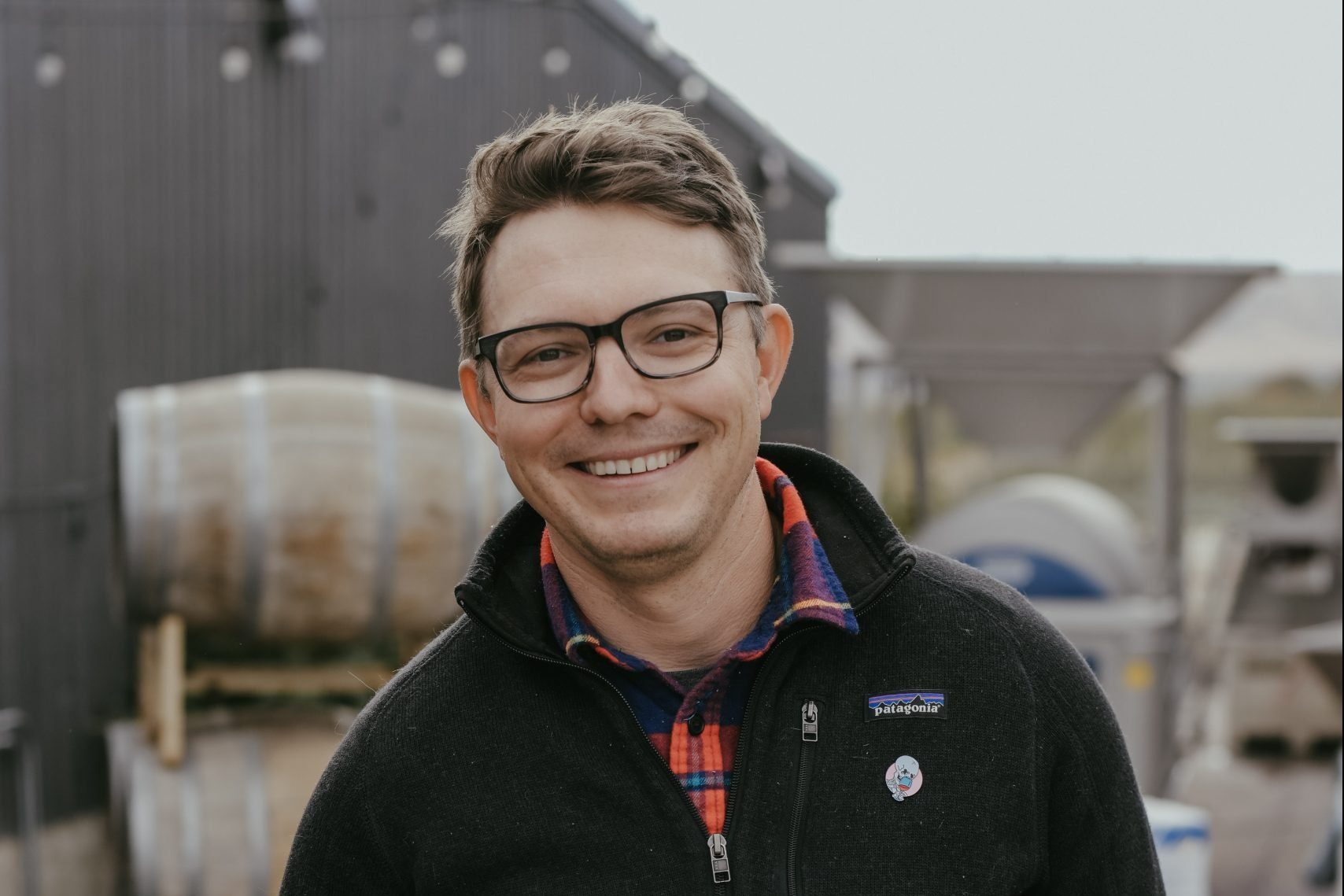 Born and raised in the Yakima Valley, Dusty’s career in the wine industry began in 2015 when a burgeoning interest in wine lead him to leave a 10-year career as a film archivist, to study Enology & Viticulture in Walla Walla. While working harvests at Seven Hills Winery and Antica Terra, Dusty honed his skills and an appreciation for sustainability and low intervention winemaking. Upon return to the Yakima Valley, Dusty joined the Gilbert Cellars team, dipping his toe into every aspect of the winemaking process.

Dusty begins his sixth vintage with Gilbert Cellars as head winemaker, bringing his minimalist approach and a shared philosophy on the value of food-friendly, approachable wines.
dusty@gilbertcellars.com 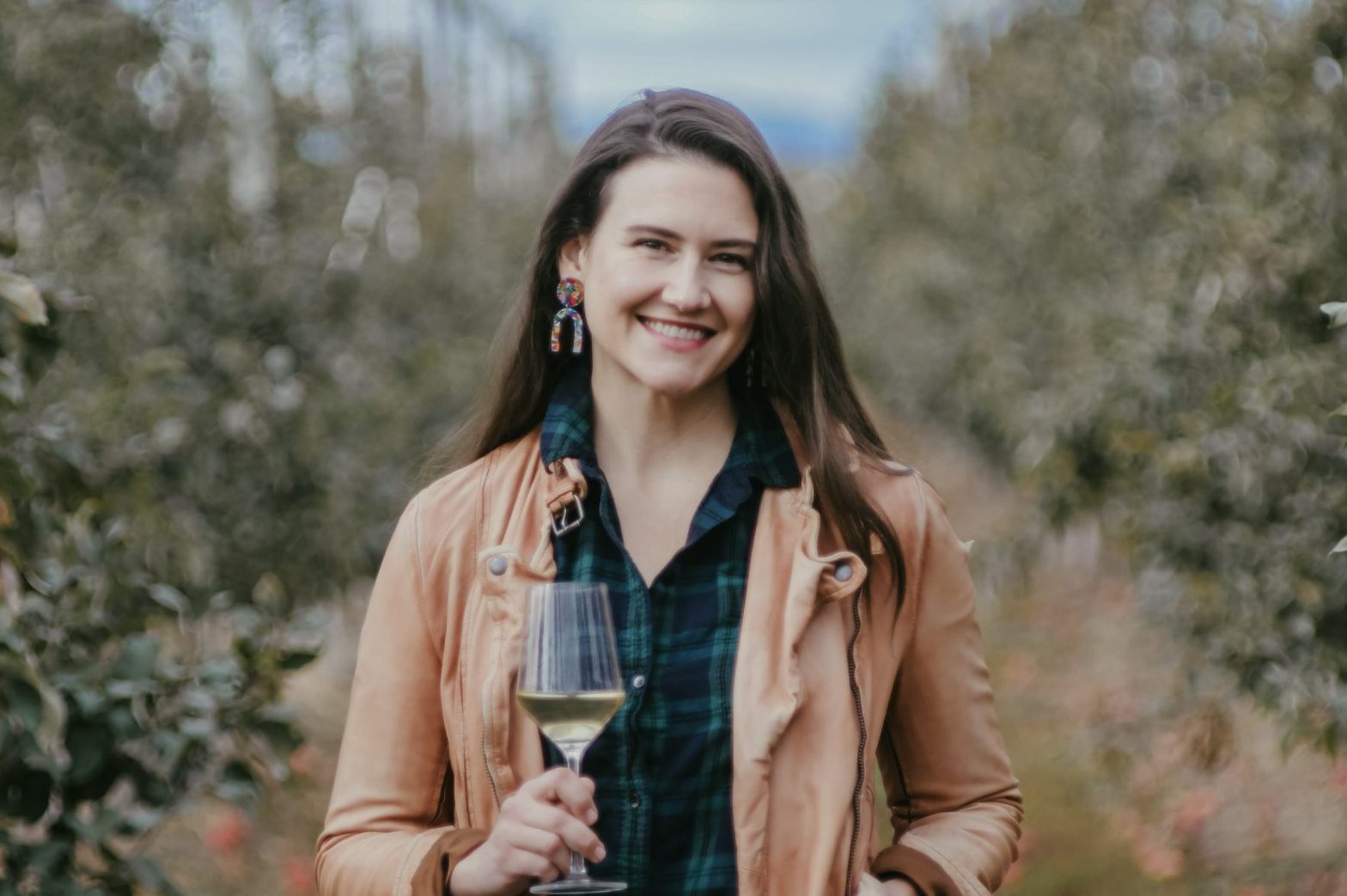 As a partner and member of the extended Gilbert clan (daughter of Purna Rankin, nee Gilbert) Laura is a wellspring of family lore with deep connections to Yakima—and Yakima Valley wines. Laura joined the Gilbert Cellars team in 2009 holding positions across the spectrum of sales and marketing. She has a master’s degree from Sotheby’s Institute of Art in London and has a perennial fondness for Malbec and Rosé.
laura@gilbertcellars.com 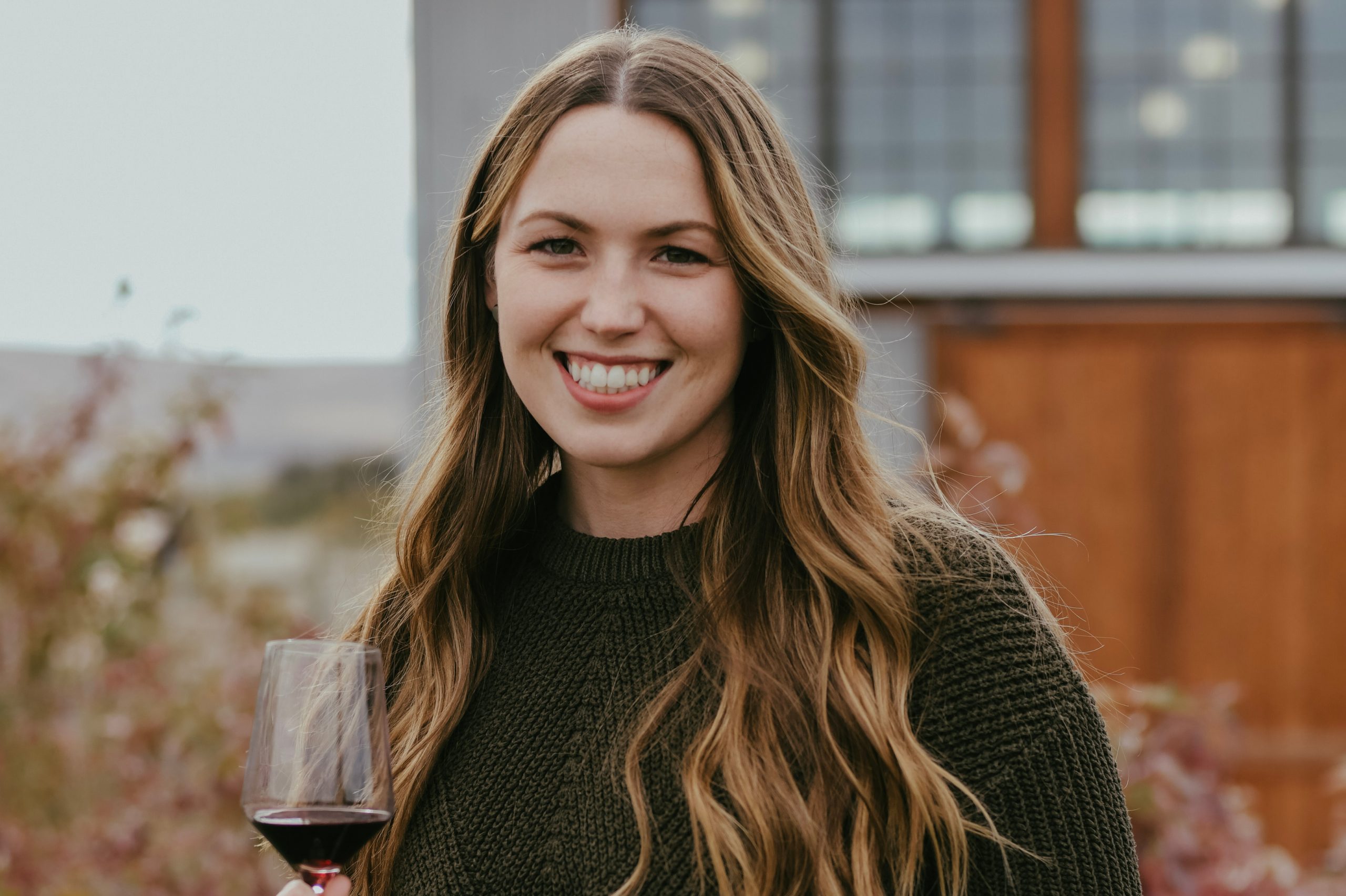 Shannon joined the Gilbert Cellars team part-time in August of 2016 after moving back to the Yakima Valley from Seattle. After a rewarding career in sales and administration, she decided to make a major career change in early 2021 to focus more on the wine industry. Early 2022 brought more change as Shannon assumed the role as the direct-to-consumer coordinator at Gilbert Cellars, taking the lead on all things tasting room & wine club. Outside of the winery, you can find her enjoying the best things in life: wine, food, music, family, friends, and of course her doodle-mix, Birdie.
tastingroom@gilbertcellars.com

A PNW native and lover of good food and live music, Via joined the Gilbert Cellars team in the Fall of 2016 after spending 10 years in Portland, Oregon. Via has a diverse background in event planning and venue management, and is thrilled to be running events at both our downtown tasting room and our winery at The Hackett Ranch. After following her heart with a leap of faith to Yakima, she’s looking forward to new adventures and proud to call this community her home.
via@gilbertcellars.com

Coming from a fourth-generation fruit-growing family in the Yakima Valley, Eric feels a strong connection to the sage-laden hills, hollows, and abundant growing conditions. Despite plans to pursue a career in radio, he found himself fortuitously connected to the Gilbert family through the marriage of his brother to Gilbert Cellars partner and marketing director, Laura (née Rankin) Schlect. After a variety of jobs, including on the family farm, Eric has found himself in the warm embrace of the Gilbert clan. Doing a bit of everything has kept things fresh and interesting, but most days you can find him pouring wine and chatting with customers old and new.
eric@gilbertcellars.com

Meg was a founding investor in 2004, joined daily operations in 2007, then took a four-month hiatus in 2010 to work the harvest in Marlborough, New Zealand, before returning to the family fold, where she headed national sales efforts from 2010 through 2014. “I love wine because of the journey it takes me on. A glass of wine can transport me to another country, teach me about the weather, and introduce me to new producers.” Meg now collaborates on various projects with her husband, Luke Bradford of COR Cellars and is teaching their daughters, Olivia & Delphine, how to hunt for agates.

Curtiss ran Gilbert Orchards for 30 plus years. Retired now, he can be found overseeing Hackett Ranch Apple production, tending to Chardonnay grapes on the Peach Ten Vineyard, traveling, and, most importantly, bouncing one of his four granddaughters on his knee.

Julie’s eye for design has come in handy on more than one occasion. She has consulted on a myriad of projects, including the winery building, landscaping, and property maintenance. And recently she’s taken on the role of doting grandmother.

A fourth generation fruit grower here in the Yakima Valley, Charlie is cousin to Cragg M. and Curt M. “Our families have a tradition to celebrate often, with great foods, great discussions, and of course great wines to inspire more of the same. There isn’t a better foundation for any family or civilization.” He is pleased to see the grapes and wine bring the talent from generation five back to the land.

We believe that what we’re doing matters—creating wines that celebrate the terroir we love. From the dirt on up. We are producing good, honest wines that have a low impact on the land but a huge impact on community. Our wines evoke a sense of community, hospitality, and beauty that is found in the Yakima Valley. Everyone deserves a good glass of wine, and we want to share ours with you, wherever your gravel road takes you. 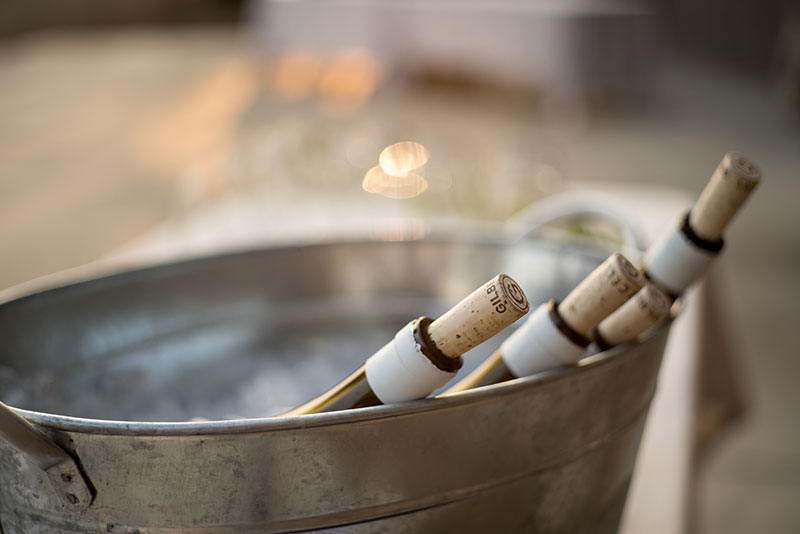 When you open a bottle of Gilbert Cellars, we hope it evokes the same sense of place and sense of adventure that we feel when we create it. The Gilbert family legacy is one of commitment, community and adventure, and Gilbert Peak is the perfect symbol to celebrate our history and our future. Our first wines featuring the new Gilbert Peak label were released in March 2014, the same year we celebrated ten years of our family winery,  and 117 years of farming in Yakima, Washington.

The Gilbert Peak Label merges the elements of legacy, inspiration, vitality and terroir that are present throughout Gilbert Cellars’ family winery.

LEGACY | In 1918, Curtiss Richey Gilbert returned to Yakima from the trenches of World War I, determined to lead the next generation in developing their orienteering skills while spending his time in the beautiful Cascade Mountains — especially the Goat Rocks Wilderness. He became an avid hiker as well as a respected local scout leader. Among his many descendants are Meg Gilbert Bradford, Laura Rankin Schlect, and Charlie Gilbert — Gilbert Cellars’ partners (and cousins).

When Curtiss died in 1947, his most frequent hiking partner, Supreme Court Justice William O. Douglas, decided to name the highest point in the Goat Rocks Wilderness in Curtiss’ honor. Mt Curtiss Gilbert, aka Gilbert Peak, was officially dedicated in 1949. The family celebrated the 10th anniversary of the dedication with an organized hike, which continued each decade following. In 1997, the centennial anniversary of the Gilbert’s move to Yakima vibrant 80 member hiking party marked the occasion. An annual tradition took hold.

INSPIRATION | The mountains were a special place for Curtiss, as well as Justice Douglas. Gilbert Cellars is formed in the same spirit of adventure and exploration. In Of Men and Mountains, Douglas wrote,

“If throughout time the youth of the nation accept the challenge the mountains offer, they will help keep alive in our people the spirit of adventure….A people who climb the ridges and sleep under the stars in high mountain meadows, who enter the forest and scale the peaks, who explore the glaciers and walk ridges buried deep in snow—these people will give their country some of the indomitable spirit of the mountains.”

VITALITY | Gilbert Peak is more than just a place, or even a family honor — it is also inherently linked to the vitality of agriculture in Yakima. As the main watershed for the upper Yakima Valley, Gilbert Peak’s glacial melt forms the Tieton River — the water that feeds acres of vineyards and orchards and supports the agricultural bounty of this beautiful region.

TERROIR | On an even bigger scale, Washington’s viticultural ties to the mountains are indelible. As Jancis Robinson reminds us, “Washington’s wine story really began fifteen million years ago, when the region experienced chaotic volcanic activity. Lava flows hardened into the basalt bedrock that covers much of the Northwest today. Cataclysmic floods followed, resulting from glaciers moving south from Canada and stopping at the Clark Fork River in the Idaho Panhandle. This enormous piece of ice formed a natural dam, creating Lake Missoula. The dam eventually burst with the “Missoula Floods” depositing sand, silt, granite, and quartz throughout the region — a cycle that would repeat itself many times over. Winds spread this matter to the surrounding hills, and volcanic eruptions in the Cascades added ash to the already-complex soils.”

The Ahtanum Ridge, which is prominently featured in the view from The Hackett Ranch where we produce our wines, was created by these ancient laval flows. The east-west Ridge, one of many in our region, creates near-ideal vine growing conditions. South facing slopes get the best sun and the steep ridge creates great drainage conditions.

Escape the gloom outside with a cozy couch and a ...

That feeling when you realized you made it through...

🍷Conduct your holiday post-mortem curled up ...

We’re down to the wire, but there’s still time...

🎁It’s the final sprint to Christmas and if ...

What do you get the guy who’s got everything? ...

🎁Take home a custom canvas wine bag when you ...

Saturday is almost here and with it our highly ...

This is how we do cozy. Reserve your spot beneath ...

Holiday shopping is in full swing. Get yourself to...

Curl up under the tree with a glass or two. ...

These halls are decked! Now let’s sip wine to ...

The holiday season is in full swing! Load up on ...

Dreaming of a white Christmas and giving the ...

This is the energy over here today. Join us for a ...

Giving a toast to all we’re thankful for today. ...

🦃 day is right around the corner and @manna.bbq...

Holiday parties are booking fast! Where will you ...

Chilly but sunny at the winery today!

New design by @majical.majic and hand-wrapped by ...

We’re in the home stretch over here!

Love splashing Rosé year-round? Get your hands on...

Get your last hit of fall before winter sets in. ...

If you’re going to work side by side with your ...

Cold days with rosé are winding to a close for ...

It’s time to prepare your cellars for the ...

You heard it here first! We’re down to the LAST ...

Avoid the Sunday Scaries by communing with nature ...

Unoaked Chardonnay pick day No. 3. Now onto the ...

Ready or not, the volume is about to get turned UP...

Took a break from the action to document our ...

Whole-cluster kind of a day.