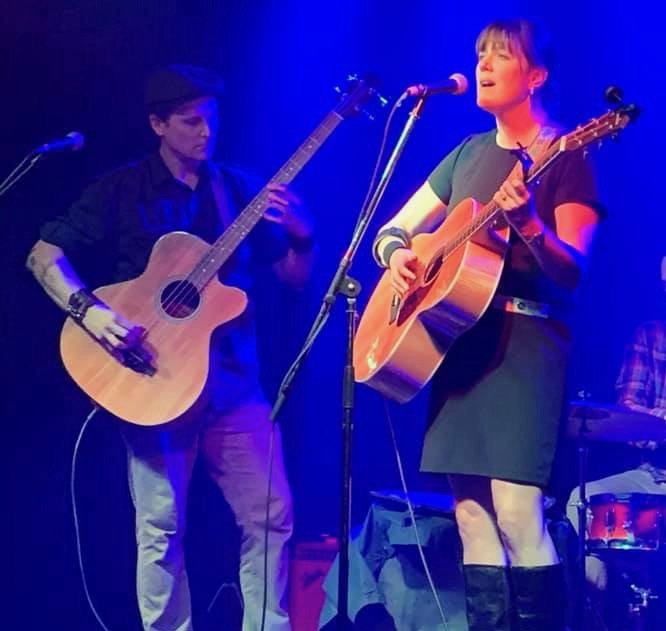 Keelan (McPhee) Naasz is a songwriter and musician from Yakima, WA. Originally from Naches, Keelan began to teach herself guitar at age 12, but focused on the clarinet, performing in the Yakima Youth Symphony, at Western Washington University, and later at the University of Oregon. When Keelan moved back to Yakima in 2004, she began writing songs for the first time. Keelan has been performing her original songs ever since, performing at the Yakima Folklife Festival and various wineries and breweries in the Yakima Valley. Deeply rooted in the folk music tradition, but also with a modern sensibility of musicians like Lana del Rey and Cat Power, Keelan’s voice effortlessly reflects pain and heartache, beauty and joy. In 2018, she joined forces with her husband Randy, who is also a musician, to write and perform songs together, and play accompaniment on each other’s original songs. Keelan also sings, plays guitar and bass with her husband in the band Subtle Jabs. You can listen to some of her music at https://www.youtube.com/channel/UCku8pJsPESwBNR_ZV6rZZOg .

June (and every month) is for equity, allyship, ...

Perfect weather to pull out all the stops. Bring ...

Summer is for basking in the sun🧺🌞 Looking ...

Being a day late to #nationalroséday means a ...

Saturday’s are full of laughter, wine, and ...

Y’all! Just a few tickets remain for the last ...

Music in the Vines Update:
The first two ...

🌹When life moves to fast, stop and smell the ...

Weekend plans? Visit us today and tomorrow for ...

What are your plans for the weekend?😎

The sweet sounds of summer are finally at your ...

🇺🇸 A day to remember, give gratitude and ...

Dreaming of those summer nights🎶
Music in ...

Music in the Vines update 🎵

Toasting with tamales on the patio today 🥂 with...

Presenting the newest vintage to the Unoaked ...

Happy Monday, kick off the week with a bottle of ...

Back at it with @theyakimafoodguy and Sunday ...

WINERY CLOSED TODAY for the first @gc.weddings in ...

It's not summer until you hear harmonies of ...

🌸May Day celebration on the Hackett Ranch ...

Looking for a place to hone your wine skills? Look...

Saddle up to the virtual bar and get acquainted ...

Picnics and Pét-Nat! Down to the final few cases ...

Come out today to taste with the winemaking team! ...

🌎Celebrating the gifts of the Earth today and ...

Club member day is upon us! Those who have ...